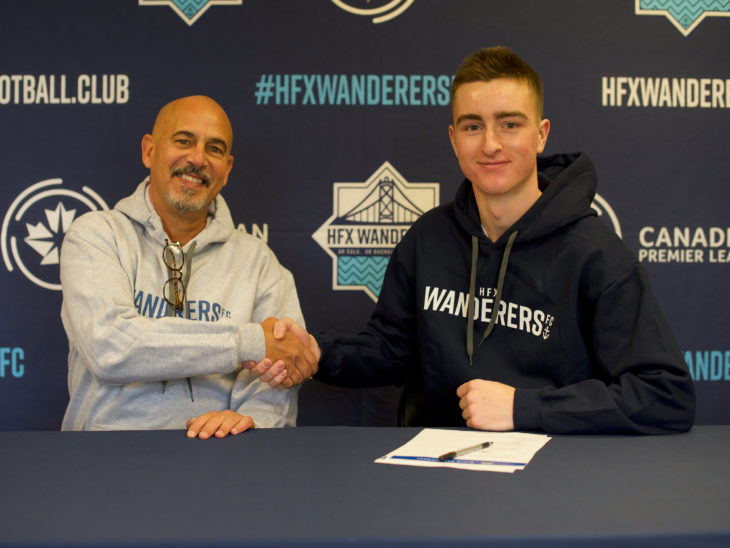 17-year-old Scott Firth is looking forward to playing for Stephen Hart in front of family and friends for the Wanderers.

HFX Wanderers FC are pleased to announce Scott Firth as the first Halifax-born player to sign for the club.

Firth is making history as the first hometown player to join the Wanderers, who are building a team for the new Canadian Premier League.

“It’s a great feeling especially being local,” smiled Firth. The fact I grew up here, to be playing in front of faces I know and see on a daily basis is something to dream of.”

Still in Grade 12 at high school in Fall River, the 17-year-old is signing for the club as another young Canadian player the new league is designed for.

After making club nationals with local team Suburban FC three times — in addition to three first place finishes at the Atlantic championship for the Nova Scotia provincial team — he’s a player Wanderers coach Stephen Hart has monitored for some time.

“He shows good tactical understanding, technically he is growing day to day and his attitude on and off the field is excellent,” said Hart. “He has shown good composure, his passing accuracy and range is statistically impressive. He has the physical capacity to work from box-to-box.”

Hart has watched Firth up close a number of times, first during guest coaching appearances for provincial programs, and also while keeping tabs on him when playing for Suburban FC.

“He is a young player but this is his chance. This league is about finding that potential talent and providing the opportunity where their game can grow,” Hart said, pointing out his assistant coach Michael Hunter deserves a lot of credit for initially bringing Firth to his attention.

While still working in Trinidad and Tobago, where he was national team coach, Hart recalls getting a video of a player Hunter wanted him to see.

“It turned out to be Scott Firth,” said Hart, acknowledging Hunter’s eye for young players with potential.

The Wanderers coach is also well aligned with the league’s roster rule, requiring a combined 1,000 minutes during the season for players under the age of 21.

“The intention is to ensure young players are not only immersed in the daily training but also allowed to play in a competitive professional environment,” said Hart.

It’s happening at the perfect time for Firth, who has dreamed of playing at the professional level since falling in love with the game as a five-year-old playing for Scotia FC.

With no national league to aspire to during his childhood, he thought he might have to move away to achieve that, until the new Canadian Premier League came along.

“It’s very exciting, as soon as I heard about the league I knew it was a chance, it’s a new pathway to the top that helps a lot of people to achieve their full potential and get noticed,” Firth said.

He got his first taste at playing against elite level opposition when he was chosen to play for the Wanderers Atlantic Selects team last summer against Fortuna Düsseldorf.

“The crowd and the atmosphere was amazing,” he said, “The Wanderers grounds is amazing, I can’t wait.”

The teenager describes himself as a holding midfield player with the vision to pick a pass and keep possession for his team.

One of the hottest young local prospects in Nova Scotia, Firth has been attracting attention from professional clubs since the age of 14.

That’s when he went for an evaluation in Lisbon with Sporting Club Portugal before landing a one week trial with Benfica’s academy the following year.

As a 16-year-old the young midfielder forced his way into Nova Scotia’s U-18 Canada Games squad in Winnipeg in 2017.

He was also involved in the Vancouver Whitecaps local residency program here in Nova Scotia, prior to earning trials with Toronto FC’s U-20 team last year.

His character helped him win the Nova Scotia performance youth player of the year, at the most recent Soccer Nova Scotia night of excellence awards.

‘It is possible to make it here in Nova Scotia’

While other teams have shown interest in his progress, Firth has always dreamed about playing in his hometown of Halifax.

“Most of my family lives around here, so they’ll probably make it out to most games. It’ll be awesome being able to play in front of them,” he said, adding he doesn’t feel pressure being the first local Wanderers player, but more a sense of excitement.

However, the fact he is a local player is not the reason Stephen Hart is signing him.

The Wanderers head coach says Firth has got his chance on merit, as an up-and-coming talent who is “one for the future,” but admits it’s an added bonus that the fans now have one of their own to cheer.

“To date he is our only local signing and this should prove popular with the fan base,” Hart said.

Firth is hoping he’s the first of a number of local players to follow the new pathway from club soccer into the new Canadian Premier League.

“It means a lot because not just being local but a role model to other young players to see it is possible to make it here in Nova Scotia,” he said.

The Firth signing takes the Wanderers confirmed number of players to nine as Stephen Hart’s squad continues to take shape with the new league kicking off in April.

The Wanderers want to congratulate Scott and wish him every success with our team.